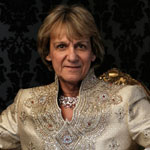 In 1976, Ian opened an antiques unit at the long established Chelsea Antiques Market on King’s Road, Chelsea, where, over a twenty-years period, he established his reputation. 1997 saw the close of this famous market, at which point Ian and his partner opened the Bourbon – Hanby Arcade, in Sydney Street, Chelsea, a name derived from Ian’s royal family background on his mother’s side.

The arcade is now well established and has been quoted as ‘The Jewell in the Crown’, of the King’s Road and is now the only remaining Antiques emporium in central Chelsea.

Ian has appeared regularly as an Antiques expert on the Dickinson’s Real Deal for ITV and and Posh Pawn for Ch4. Ian is currently in development to front his own programme now.

In addition, Ian is becoming increasingly involved in Art & Antiques Consultancy, where he has successfully concluded several major sales for various high-net worth and high profile clients.

Ian works also in cooperation with M.A.D associates and is about to launch the swanneck pen for left handed writers.

As well as the UK, Ian is in demand both in the UAE and Australia where he has a growing fan base and visits regularly for work and pleasure.