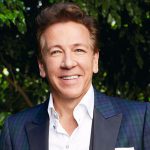 Multi award-winning, Los Angeles based Ross King MBE is one of Britain’s most vibrant and versatile performers. He is seen daily in the UK and Europe on ITV’s top rated morning shows, Good Morning Britain and Lorraine as their US Correspondent.

In 2019 Ross can be seen on CBS’s new primetime network show, The World’s Best as a judge. For US network television, Ross has hosted The Hollywood Christmas Parade, The Critics Choice Movie Awards Red Carpet and primetime TV specials for, among others, Will and Grace and CSI.

On radio, Ross became Britain’s youngest daytime host on Scotland’s Radio Clyde, winning a prestigious Sony Award. He has hosted numerous radio shows on London’s Capital Radio, UK Talk Radio and BBC’s Radio 5, receiving a second Sony award for his Olympic coverage. He achieved a lifelong ambition co-hosting the American Weekly Top 40 countdown alongside the Legendary DJ Rick Dees. His radio show The King in LA has been syndicated across the UK.

Ross is the voice of American Express…but sadly he can’t pay off your balance.