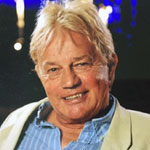 Frazer Hines came to prominence as a child actor, appearing in several films, including Hammer’s ‘X The Unknown’ (1956) and Charlie Chaplin’s ‘A King in New York’ (1957). In 1957 he played Napoleon in the six part BBC serial ‘Huntingtower’ and followed this with the role of Jan in the seven part BBC serial ‘The Silver Sword’ (1957-8).  Other television roles in the sixties include the characters of Tim Birch in ‘Emergency Ward 10’ (1963-4), and Roger Wain in ‘Coronation Street’ (1965).

His big break came when he was cast to play the part of Jamie McCrimmon in the BBC series ‘Doctor Who’, a companion of the second Doctor, played by Patrick Troughton. Frazer appeared in the series regularly from 1966 to 1969, earning himself a place in the Guinness Book of Records as the longest running companion of the Doctor. He returned to the show twice, as a cameo in the 30th anniversary show ‘The Five Doctors’ (1983), and alongside Patrick Troughton (second Doctor) and Colin Baker (sixth Doctor) in ‘The Two Doctors’ (1985).

In 1972, Frazer was cast in the soap opera ‘Emmerdale Farm’ as Joe Sugden, a role he played regularly until 1994. Since leaving the show he has concentrated on a career in the theatre, appearing in many plays, and he currently believes he holds the record for the second most consecutive pantomime appearances – the record holder being Christopher Biggins! His most recent theatre tours were Agatha Christie’s ‘And Then There Were None’ (2015) and ‘Seriously Dead The Musical’ (2016/7).

Other recent appearances on film include as ‘William’ in the multiple-award-winning short film ‘Sundown’ (2018), as the mysterious ‘Thomas’ in the film ‘Blood Corral’ (2018), and as ‘Frank’ in the film ‘Lost at Christmas’ (2020) which was the BBC’s most viewed Christmas film in 2021.

More recently on television, Frazer appeared as Sir Fletcher Gordon in ‘Outlander’ (2016), and made two memorable appearances on the TV Soap ‘Doctors’ playing ‘Sonny Troughton’ (2020), a lovable rogue. Frazer has also featured on ‘Jane McDonald: My Yorkshire’, ‘Pointless’, ‘Who’s Doing the Dishes’, ‘Lorraine’, ‘Posh Pawnbrokers’ and ‘Emmerdale Family Trees’ among others, appeared as ‘Ludicrous Sextus’ in an audio revival of ‘Up Pompeii’, as well as many ‘Doctor Who’ projects on audio and Blu-Ray for Big Finish Productions and BBC Studios.

Over the years he has amassed 95 credits in film and television, going back to 1955 in a career which has covered 8 decades!

In his spare time, Frazer is part owner of a stud farm near Newmarket, continuing his love of horses which led to him being a noted amateur horse jockey in the seventies and eighties. He is an active member of The Water Rats, and attends several charity events each year on their behalf. He is a keen sportsman and cricketer, and regularly plays charity events during the summer months.